The Guild of Nurses

The City of London Guild of Nurses

For the Nursing Profession - past, present and future

During the first year of the Guild, we were very proud to welcome Freemen who wished to contribute at the start of this venture and the names of those Foundation Freemen will be remembered in perpetuity.

In addition, we were most fortunate to be supported and advised by Keith Lawrey JP, LlB, MA, MSc (Econ), Barrister, FCIS as Foundation Clerk and in recognition of his work, Keith was made an Honorary Freeman of the Guild of Nurses at the banquet on 12th May 2017 in the presence of the Lord Mayor. 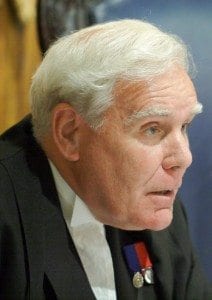 Keith was educated at Colfe's Grammar School (as it then was), the Honourable Society of Gray's Inn and Birkbeck and Heythrop Colleges of the University of London.  He married Jane almost fifty years' ago and they now have four children and seven grandchildren.  He spent thirty five years on a  London Petty Sessional Division as a Justice of the Peace, he is a Methodist Local Preacher, is much involved with Gray's Inn, and was Honorary Treasurer of the College of Preceptors for twenty years.

He is a career educationist having spent half his working life in the groves of academe and the other half administering professional and learned societies.  He began that working life at the Plastics Institute, a small professional institution in which he became the Education Officer and spent eight fulfilling years mentored by a capable and experienced Chief Executive from whom he learned much.

However, his heart lay in teaching and he moved into lecturing at what is now the New University of Buckinghamshire.  He started teaching general Business Studies but soon specialised in Law creating a flourishing student law society  and is still in contact with some of those students – who are themselves now retiring!  He was then appointed, after six years, to the headship of the department of Business Studies at the Mid-Kent College of Higher and Further Education at a time of considerable expansion of higher education and, sadly, it became impossible to undertake a regular teaching timetable as well as a heavy management load.  These were also happy and successful years,  but  his next move was back to the institutional world when he was appointed Secretary-General of the Library Association (as it then was).  This provided another six challenging years where he became involved with parliamentary activity and learned much about incorporation by a Royal Charter – lessons that have proved invaluable later in life.

He missed the academic world and so returned as Dean of the Business and Management Faculty of the Harrow College of Higher Education.  Although still primarily an academic manager, he was much involved in professional institutions as a committee member, an examiner, with some minor research that led to publications, and in giving the occasional specialist lectures.  After another six happy and fulfilling years, Harrow's merger with what became the University of Westminster led him to the Royal College of Veterinary Surgeons as Secretary and Registrar where he was much involved with professional disciplinary matters and where he reinforced his links with the Privy Council Office.  Then, fortuitously but quite unexpectedly, the opportunity arose to return to his old preparatory school as headmaster to try to save it from closing – a challenge he could not resist.  He failed to save it but he and Jane enjoyed perhaps the happiest three years of their professional life!

In his early academic retirement, he was appointed to the part-time post of Learned Societies' Liaison Officer for the Foundation for Science and Technology – a post that he still holds and thoroughly enjoys.  His career history might well indicate that he was groomed for the job!

This latter period has also seen him much involved with the Livery world.  His mother Company is the Worshipful Company of Chartered Secretaries but, in 2001 he registered the Guild of Educators with the City of London and subsequently as Honorary Foundation Clerk, he took the Guild through to Worshipful Company status in 2014.  He then retired but seized the opportunity at least to assist in the launching of the Guild of Nurses when it was offered in 2015.  He has much to do with some other Companies through his work at the Foundation as a result of which he has been made an Honorary member of four of them.