I was privileged to be invited to join the Guild of Nurses for a tour of the Military Medicine Museum. This is an incredible gem of a museum, suitable for all ages and free too! It is located on the Military barracks in Ash Vale and open for group visits by arrangement, or for individuals on the first Saturday of every month. 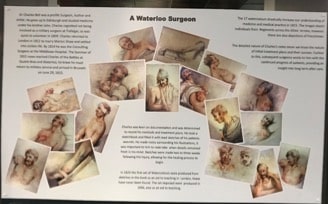 The museum incorporates fascinating articles relating to army medicine, military nursing, veterinary and dental care. It is a surprisingly large museum, with a superb array of fascinating artefacts: They have a running vest of Roger Bannister, Himmler’s death mask, an enema loaned from the Queen and a dental kit that was used to treat Napoleon. There are incredible stories of suffering, bravery and horrifying cruelty. They have branding irons previously used on deserters. Unbelievable stories concerning James Barry, the first women surgeon in the army! There are reams of fabulous original illustrations of Casualties from Waterloo that were used to teach and illustrate recommended treatments, before the age of the camera. 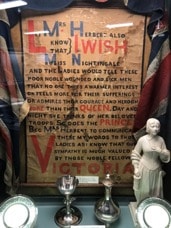 I was previously unaware of the vital importance of Dentistry to our military endeavours and the origins of the saying ‘bite the bullet’. Fusiliers needed to have strong enough teeth to remove the outer wrapper of their bullets to load their guns. Poor dental hygiene meant many soldiers suffered from gum disease and abscesses and pre-penicillin, this could be fatal. Common practice was to collect teeth from corpses following battles, insert them into animal bone and make dentures. Dentures were also made from animal horn. These teeth were so costly that they were frequently bequeathed to next of kin!

Veterinary medicine became critical to the success of battles, in the Boer War, they were losing about 300 horses every day. Horses were relied upon up until midway through the 1st World War, for all transportation. Dogs and pigeons have also proved integral to battle successes.

The museum holds the largest collection of Victoria Crosses and Dickin medals for animals.

They have a walk-through exhibition showing the journey a casualty took in World War One; from battlefield casualty station through to being evacuated on trains or barges. The museum demonstrates the improvements from then until now and there is wonderful original world war moving footage of casualties being treated and transferred.

There are exhibits showing the development of prosthetics and plastic surgery and how, learning from World War 1, Psychiatrists became integral members of the medical team in subsequent battles.

There is a wealth of information about the advancement in drugs and pharmaceuticals, exhibits about the development of gas masks and breathing apparatus and even an iron lung! (we had patients still using such iron lungs when I was nursing at St Thomas’).

After touring the exhibits, we were treated to a fascinating talk from Colonel Jim Ryan looking at Military Medicine throughout the ages. We learnt about incredible advancements in hygiene, asepsis and management of casualties from pre-Roman to the 1800s and how somehow, we appeared to forget everything and briefly return to the dark ages! The struggles in the Falklands following the sinking of their main hospital ship and how they were forced to operate in a dirty disused refrigerator plant using old fashioned kit, as that was all that was available.

Colonel Ryan talked us through the state-of-the-art advancements in modern military medicine and demonstrated how far we have come. Casualties are now recovering from horrific physical trauma and extremely complex injuries – however this brings with it, additional ethical issues.

With huge thanks to Janet Oxlade from the Guild of Nurses for organising everything, to Colonel Ryan for a wonderful and enlightening presentation and to the Military Medicine Museum for our fascinating tour, great lunch and for making us all so welcome.