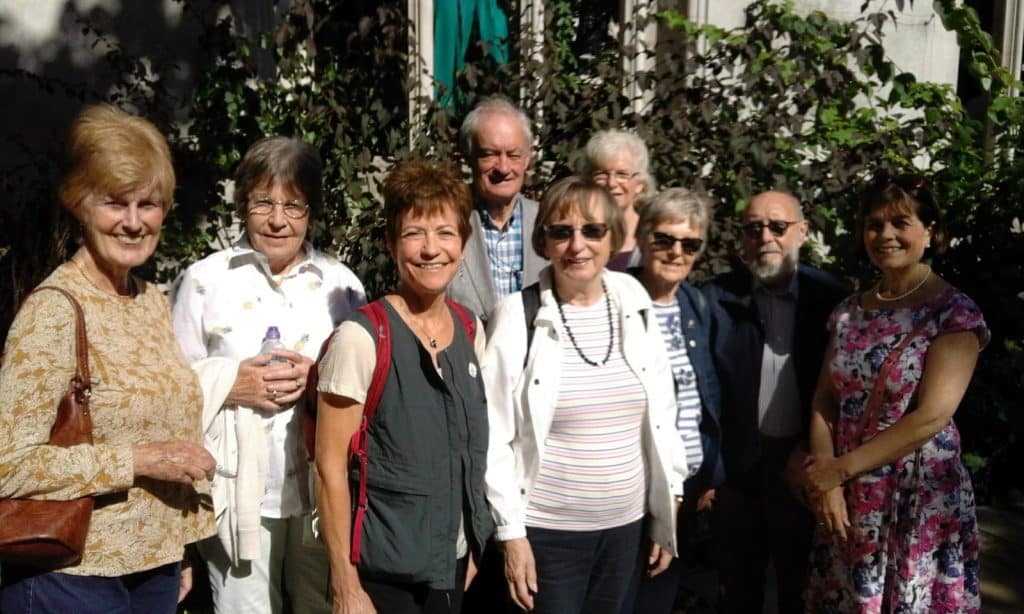 On Saturday 21st September, nine Guild Freeman, members and their guests met up on a lovely sunny day to join our City Guide, Kathryn Williams, on a fascinating walk learning about the Churches and history of the south eastern area of the City. As our walk coincided with the City of London Open Weekend we were also lucky to be able to enter most of the Churches which are often closed on a Saturday.

Highlights included a visit to St Stephen Wallbrook, the church of Chad Varah, the founder of the Samaritans. We were able to see the first Samaritans phone: Mansion House 9000. We also visited St Michael Paternoster the church where Dick Whittington was buried.      We walked to a church, St Dunstan in the East, which was not rebuilt after the Blitz and the remains of the Church have been turned into a beautiful secluded public garden, an area of calm away from the busy streets.

Throughout our route we passed many of the distinctive street bollards found in the City. Kathryn informed us how after the Battle of Trafalgar the French ships were stripped of their cannons, and a decision was made to reuse the cannons as street bollards. There are few of the original cannons left but replicas are made today their distinctive shape continue to be an iconic feature of London’s streets.

We ended our walk at All Hallows by the Tower, which escaped the Great Fire of London and Samuel Peyps is recorded to have watched the fire from the Church tower.